punchymclochface (or "punchy") is a web service. First glance at service files shows it's based on Flask. When browsing service's pages we saw it allows uploading some sort of images.

A closer look to the source code revealed that a lot of it's logic is actually implemented in 3 .so libs (join.so, libstaply.so and decode.so) that were loaded with ctypes.CDLL. And images uploaded to service should be punch cards. We extracted some of the images that checksystem sent to the service, they looked like this:

We also examined files of service running on our vuln and saw that several files with random-looking names appeared in data dir, with content looking like this:

This is code in COBOL programming language and, as the name implies, values in FLGBASE32A and FLGBASE32B were parts of base32-encoded flag.
A glance at the function run_help from libstaply.so in IDA reveiled that service compiles the code with cobc (GnuCOBOL) and runs it. 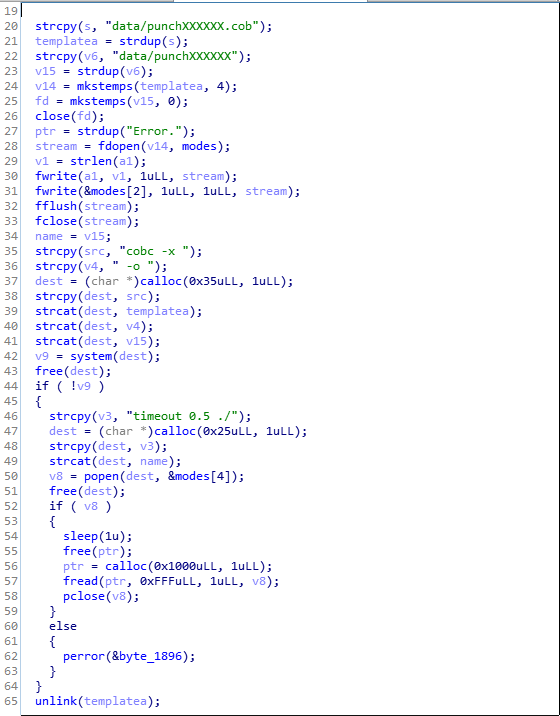 We suspected that this COBOL code was somehow encoded in sent punch cards and, indeed: we replayed images sent by the checksystem and it could handle them without error, producing lines of COBOL code, one line per image.

All in all, service functionality that seemed useful for us was:

So this is an RCE-as-a-service that runs uploaded COBOL code encoded in punch cards. If we could generate valid punch cards that the service will correctly decode to our desired text, we would be able to line-by-line upload and then run arbitrary code!

Instead, to generate valid punchcard we used this script. (can be found by simply googling "python generate punchcard"). It produced images looking very similar to those we saw from checksystem. Few issues we faced with it were:

One does not simply write exploit in COBOL. Looking for 'cobol read all files from directory' in google gave us some 60-lines program in COBOL which cannot been compiled without errors. So we had to read the documentation. We were able to find suitable crunch called "SYSTEM" in section "8. Interfacing With The OS".
It allows us to make

where "command" is arbitrary shell command.

Finally we got the following exploit:

To test our uploaded code worked we firstly tried simple "Hello World" programs like this one.

And for a long time we were unable to make them work. We compared the code to the one uploaded by checksystem and it appeared that lines should be left-padded with 7 spaces. Also, the whole line obviously can't be longer than 80 chars - it just won't fit in 80-column punch card.
Final exploit code we used to steal flags was:

The patch is chmod -r data - disable listing in dir with flags.
Files with flags had randomly-looking names, also, service was running under a separate user and rights on service files were rather restrictive - source files, binaries and with dirs belonged to root, so service was unable to chmod +x the dir back or modify itself.

DevMaster 8000 and DevMaster 8001 were sandbox challenges on Google CTF 2019 quals. The gist is it provided a…