"slot machine" was a hardware task in the reverse-engineering category on Google CTF Finals 2017, which took place in Zurich back in October 2017.

All teams got the same ATtiny-based slot machine game, which contained 2 stub flags. The objective was to reverse-engineer it by disassembling it (in literal real-life sense) and dumping the firmware, figure out how flags can be obtained without access to the circuit, and do that with the machine at the organizers' table, which contained the real flags.

The programmer has the ability to download the firmware (unless it was read-protected through so-called fuse bits), so that's probably exactly what we're going to do. 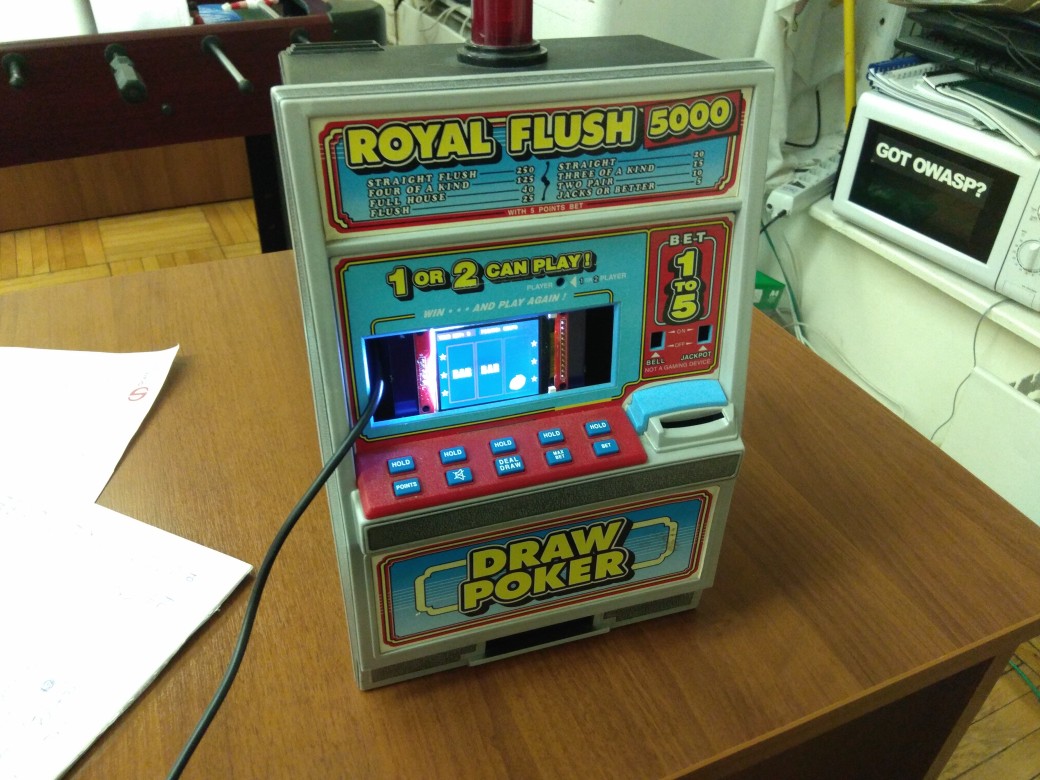 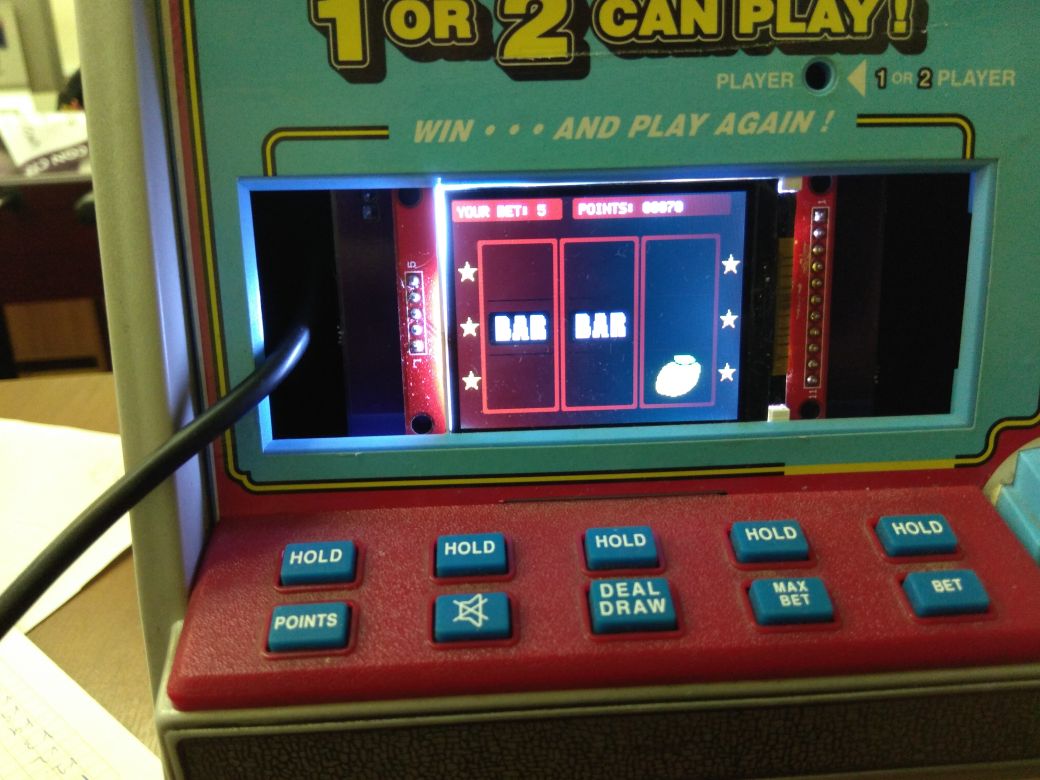 The slot machine has an LCD screen, like those commonly used in various DIY Arduino projects, and can be found cheaply on AliExpress.

Out of 10 buttons, only 2 from the upper row appear functional and, according to the schematics, the lower row is not connected at all. Pressing the leftmost button cyclically changes the current bet from 1 to 5. Pressing the second button plays the game. At the start of the game, you have 100 credits.

The game works like a typical slot machine. At the center of the screen, there are three reels, which display random symbols each time game is played: nothing, "bar", lemon, and "7". Having three matching symbols in a row will give you some credits based on your bet.

However, at that point, the conditions to get the flags were not yet known.

So, without much hesitation, I disassembled the slot machine. What was inside is a printed circuit board with ATtiny88 microcontroller. 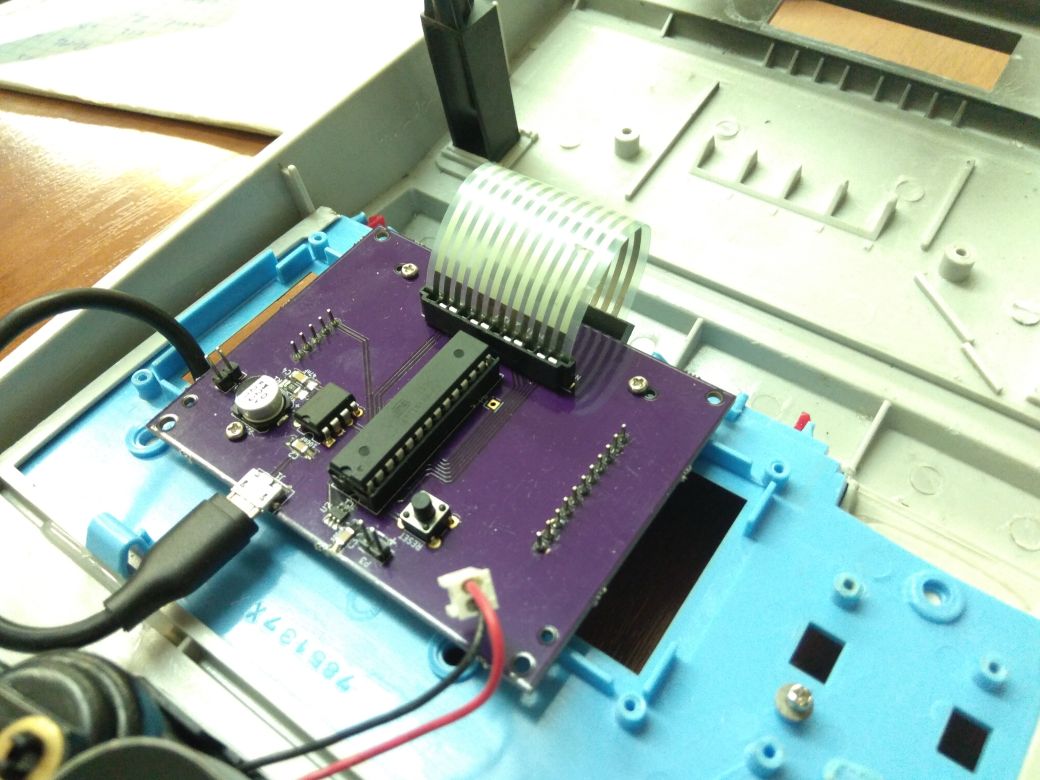 ATtiny is one of the less powerful microcontrollers in AVR family. Although all AVR microcontrollers share the same basic instruction set (there are some instruction extensions, though), they have different set of integrated peripherals, like timers, IO ports, SPI interfaces, and so on.

In order to figure out how to connect the programmer to the MCU, we need to consult with the datasheet. 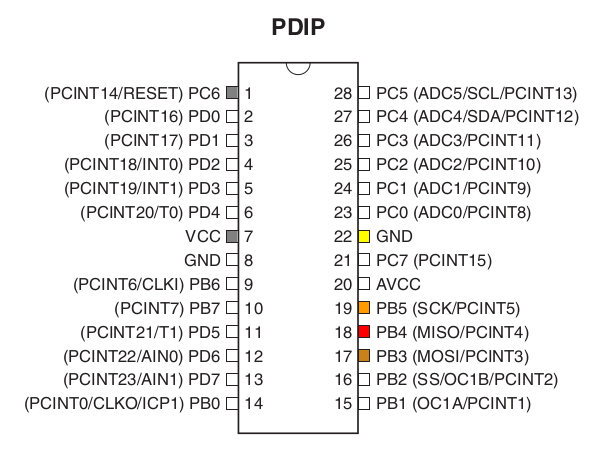 MISO (master in, slave out), MOSI (master out, slave in), SCK (serial clock), RST (reset), VCC (+5 volts) and GND (ground) must be connected to the corresponding ouputs of the programmer.

Since these outputs are not exposed on the PCB, microcontroller IC had to be removed from its socket and inserted into the breadboard. 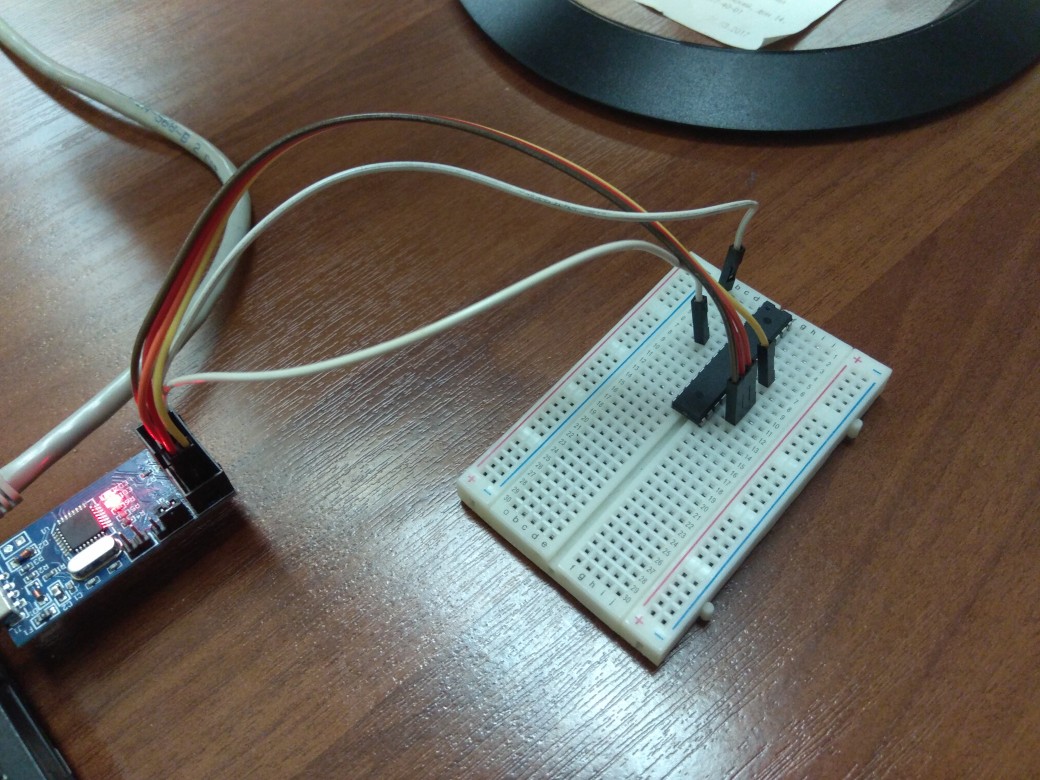 Once it's done, it's easy to dump the firmware using avrdude program. It wasn't read-protected after all, so there were no problems dumping it.

AVR processors are relatively well-supported by IDA disassembler. Although there's no Hexrays decompiler support, disassembler works mostly fine, but there are still some annoying problems.

One the of the major obstacles is CPU selection dialog.

Although all processors in the AVR family have the same basic instruction set, as it has been mentioned above, they have different set of integrated peripherals and amount of available memory.

Selecting device with mismatching memory size will result in either truncated code section or buggy data section references (or both).

The registers tend to occupy the same location across all AVR family. That is, locations corresponding to missing peripheral will be described as "reserved" in the datasheet, and remaining registers will be "fragmented" instead of "compacted".

However, interrupt vector layouts are very different. There are no unused vector numbers (which is likely caused by the fact that it would waste precious flash memory otherwise). For example, compare interrupt vectors on ATtiny88 and ATmega328p.

It wouldn't be much of a problem if IDA actually had definitions for all the AVR processors. Unfortunately, as you can see on the screenshot, it isn't the case. So the best option seems to select the best matching processor (which one is the best matching is also not obvious), and fix incorrect things (like interrupt names) by hand, consulting with the processor reference manual.

Another problem lies in how .data section is initialized.

To understand the problem, let's first discuss C and compilers in general.

.data section is where initialized data in your program goes to. In C, that would be all non-zero initialized variables with static lifetime (i.e. global variables and static variables inside functions). There's also .rodata section for things like string constants (AFAIK there's no memory protection in AVR, so there's no dedicated .rodata either).

How do these variables get from the executable file to the RAM?

On typical desktop Linux, this is handled by the ELF parser with the aid of MMU: ELF parser maps the corresponding regions of the ELF file with copy-on-write access rights. This operation is transparent, and the description of the .data region - where it lies in the binary and where it should be mapped - can be easily parsed from the ELF file.

There comes a little caveat. There's usually no ELF parser in embedded devices. And no MMU, either. There's just a blob of code in the flash storage, where the only thing you know for certain is entry point address.

How is .data section handled in this case?

In the avr-libc (which is a commonly used C library for AVR), there's a small piece of code that's executed right after reset, just before calling user's main function.

What this code does is it copies initial values for .data section from the persistent flash memory to RAM. These initial values are stored simply appended at the end of .text (code) section.

Let's take a look at the assembly code.

For the people unfamiliar with AVR assembly, a couple of points:

In order to see the data in IDA, you'll need to copy the data manually. The following IDA Python script will do that for you:

Now that we're set, let's finally dive into the code.

Of course, I'm unable to reproduce the exact sequence of actions I did to figure out the program flow. Neither would it be practical due to rather chaotic nature of reverse-engineering process.

However, one of the first things I noticed certainly was the flag strings:

We can start from there.

Here comes another problem with IDA and AVR assembly. AVR is 8-bit processor having (up to) 16-bit addresses. So when constant address is passed to the function, it's stored in register pair using two load instructions. IDA can't recognize this pattern, and cross-references for data don't work as is.

I had to resort to searching for individual bytes of the addresses using "Search -> immediate value...".

There were two fragments of the code mentioning addresses of the two flags:

They both lead to function that display "Congratulations!" and the flag on the screen.

The flag addresses don't seem to appear anywhere else, so we're likely looking in the right place.

Tracing the code graph upwards, I found the following code:

unk_1001DE is incremented each time any button is pressed. So every time user presses buttons 9 times in any order, check_secret_sequence loop executes.

Intuition suggested that it's some secret key combination, and that array on the stack contains last 9 pressed buttons.

And the intuition was indeed correct, pressing buttons in order (0 being the leftmost button, and so on) specified by the second array gave me the first flag. 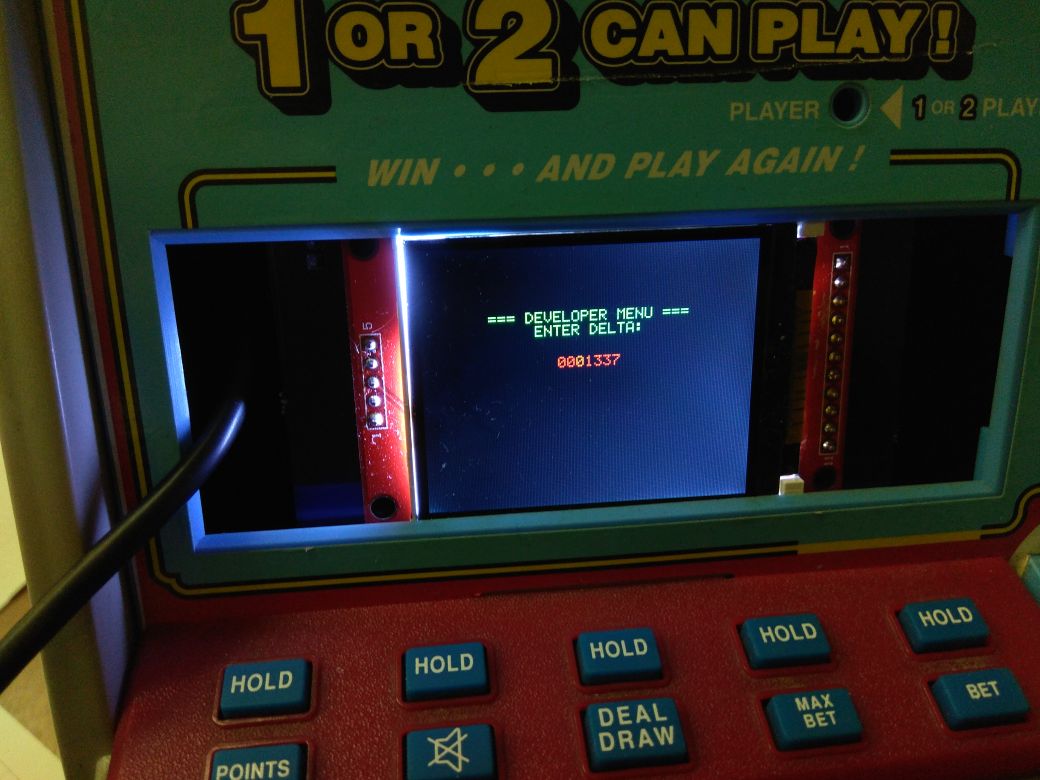 I bet most of you have heard the story about hackers that predicted the internal state of actual real-life slot machine PRNG to get advantage and win money reliably (though I haven't actually heard the story until after solving this task :)).

The second part of the task is pretty much the reenactment of that story.

Although the initial state of PRNG seems to be truly random, the PRNG itself is rather weak. It's just linear congruential generator with 32 bits of state, driven by equation state = state * 0x41C64E6D + 31337.

rand() function is called 9 times per every game, once for each symbol on the screen. Symbols are determined in column-major order, that is, the left reel comes first (from top to bottom), then the middle reel, and finally the right reel.

Each symbol has some fixed probability. It can be expressed as the following pseudo-code:

It leads to the following idea: play a couple of games, take notice of which symbols are rolled, then brute-force the internal state of the generator. Although the brute-force will be probabilistic, the longer the sequence is, the higher chance there is only one such initial state. In practice, playing 5 games is more than enough to reliably find the state value.

With current internal state known, it's now easy to find the number that must be added to the current state in order to get the state where triple "7" will be rolled immediately.

Brute-force program and most of the PRNG reverse-engineering work was done by my teammate vient.

You can check out the program here.

This is a pwn task from the 34C4 CTF. The goal is to write a shellcode using only prime bytes.…

This task is a remote x86_64 binary (both binary and libc were provided), tagged as "pwn"…